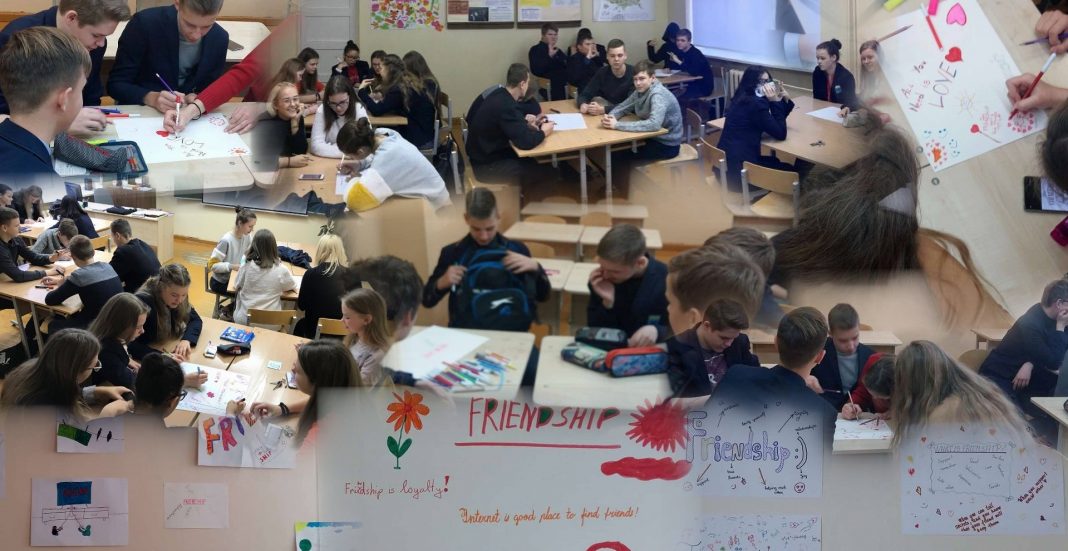 To reduce disparities, to combat discrimination and segregation, to tackle bullying and to foster tolerance numerous interactive activities were organized during this week. Our approach is combined with fun and the activities were adapted to the students’ abilities. Ersamus+ team initiated an innovative approach – lessons during which students write compliments to each other in foreign languages they learn: French, German, Russian and English. Working in groups in 4-6 students had to think about their classmates personality qualities they admire, their academic achievements, hobbies, talents, support they have received from each other and express their appreciation in a foreign language. The students used paper and online dictionaries to look up the necessary words, peer-teaching took place. A sense of achievement was stimulated: everybody wrote compliments according to their abilities and everybody received compliments. ‘School dropouts’ successfully joined the activities, a very positive and friendly environment was established in all the classes. Students’ creativity was well established: some students drew or cut pictures alongside compliments, they created ‘trees’, ‘bunches’, ‘ships’, ‘seas’ of compliments and many other creative ideas. More than 300 students were involved. However surprising it might seem, the senior students described the lessons of ‘Writing compliments’ as ‘the best lesson ever’. We would like to say special thanks to our colleagues Zivile Vaiciuniene, teacher of French, Giedre Arlauskiene, teacher of German, Liudmila Auguceviciene, Nijole Redikiene, Aurelija Jazbutiene, teachers of Russian, Vitaly Kirilov and Ausrine Janusiene, teachers of English.

The activity was carried out by IVth-graders. Prior to this, Erasmus+ team members – teachers of English A.Kakliene and A.Janusiene gave special English lessons in I,II, III and IV Gimnazia classes on propaganda, hidden agenda, propaganda techniques and critical thinking, using online resourses provided to the teachers for the Anti-bullying week on http://www.childnet.com/resources/trust-me . The aims of these lessons were to help students understand the concept of critical thinking and apply it to examples online, recognise some of the differences between fact and opinion, think of ways to evaluate what is trustworthy online; understand the term propaganda and how it can impact their opinions, identify and understand different propaganda techniques and analyse the reasons behind them, use selected criteria to critically assess different media and messages.
An innovative task involving the use of ITC tools was given to the students as optional homework: do research into the online content that they often view and find propaganda, identify the propaganda technique and describe the hidden message. The results were amazing: next lessons the majority of the students were willing to report on what they had discovered. The participants navigated the complicated world of digital resources and had a class discussion using a range of digital tools: their smart phones, tablets, computers. They taught each other about propaganda techniques which they discovered in advertisements, on Facebook, Twitter, in news portals, even Russian songs and other online contents. Everybody found such an English lesson very involving, they gained presentation skills and public speaking skills. They boasted about this lesson to their peers.
This experience helped the participants develop critical thinking skills which can support them not only in learning the school subjects but also in later life.

In order to promote friendliness, kindness, support and understanding the students were invited to discuss what friendship means to them. The next step was to create a script for a film about friendship. 80 students were involved in creating scenarios, and about 30 students decided that they wanted to turn them into a real film. The students were challenged to boost their digital skills by filming, and use the footage for their film, add the soundtrack, special effects and subtitles. They improved their social skills by interviewing students, teachers, even people in the town community. Linguistic skills were improved as they had to translate the majority of the interviews into English. Students had a possibility to demonstrate their talents and skills. They learned time management skills, working in a team, critical thinking and problem solving skills. Five films about friendship were presented to the school community. On November 16 – on the International Day of Tolerance – 90 students from the Ist class watched the movies together with their class teachers and teachers of English and voted for the best film about friendship.

The aim was to make students aware of the importance of critical thinking – the key competence in this modern world and to prepare them better for the real world. The lecturer encouraged the audience to confront stereotypes in their own lives by giving simple, realistic examples. He emphasized the problems the digital world is causing: avoiding reading, excessive use of emoticons and pictures instead of the verbal language. The students’ minds were challenged. After the lecture they discussed it a lot, some were even angry. This was well expressed in the results of the survey, whose aim was to assess the success of the lecture and its impact on the students’ thinking, beliefs and attitudes.
This is what they wrote:
‘I really like it. He gave me some great ideas about critical thinking and about nowadays’ problems. It was very interesting to hear it’.
‘I loved how clearly and passionately he expressed his ideas. It made me think about the topic even when I got home’.
‘He is a conceited person. He thinks too highly of himself. He starts talking like that: You are all stupid and he repeats that 3-4 times.’
‘It was very interesting to listen to and also it showed other perspective on life and stuff’.
‘He inspired me to express my opinion and how I should express it’.
‘He said some good ideas, like if you want to train your brain, you should start thinking’.
The lecture was attended by around 100 Ist-grade and IIIrd-grade students, and according to the results of the survey, to what the students and the teachers told later, it was a success.

The priest spoke about the fundamental values of the humanity – everyone wants and needs to be loved, the importance of respect and the danger of disrespect. He shared his social and cultural experience living, studying and preaching in many parts of the world: Italy, USA, Britain, Israel. He asked the students questions and made them active participants of the lecture, not only listeners. He explained what lack of tolerance towards other races, cultures and religions can lead to.

The lecture was attended by around 80 IInd-grade students. This is what the students thought about it:

‘I really like the lecture. It wasn’t just a simple talk, he said some interesting ideas that really blew my mind.’

‘I think the lecture was educating’.

‘His speech was involving, he analyzed tolerance problems which are common these days’.

‘Very positive! Why? Because it changed my view towards other people’.

‘He spoke about his experience moving around the world and meeting different people’.

From the students’ positive comments we can tell that the lecture made a huge effect on them. We are convinced it was a very successful activity of our Erasmus+ project and it will have a long-lasting effect on both the students and the teachers.

We say YES to friendship and NO to bullying. The students were fully engaged in the positive message. Drawing symbols of friendship – what friendship means to them, writing key words in English, in this way boosting linguistic skills, expressing their creative ideas, and, most importantly, working together with their classmates, bonding with each other – this is what posters were all about. A sense of belonging was something that many students emphasized during this activity. Teachers Vitaly Kirilov, Justas Zulkus, Ausrine Janusiene, Audra Kakliene (teachers of English), Asta Pantelejeva , Nijole Redikiene and Nerijus Vaisvilas (class teachers) involved about 90 students from grade I and displayed the posters for the school community to admire.

Since 2004 Palanga Senoji Gimnazija has been cooperating with the International Commission on Historical Justice and has set up the Tolerance Education Center. This year, it has traditionally responded to the call of the Commission to creatively mention this date and join the contemporary civic initiative “Give a Hand of Tolerance”.

This traditional iniative is an attractive means to encourage students to understand tolerance and intolerance in our lives in the historical context: remember the recent 20th century. facts of Lithuanian history. The initiators believe that learning should involve not only the mind but also  the heart and hands. In the context of tolerance, the symbol of a hand is not accidental, because good and bad things are done with the hands of man in the world. Hand create and hands break, all hands are different: a little child and an adult or an elderly person, male and female, different races. And it only depends on us what – good or evil – we will use our hands for. A stretched hand is a sign of openness and confidence. Openness and trust in the gymnasium were demonstrated in the campaign “Our Hands”. The campaign included a Flashmob joined by all the school community and cutting hands and writing on them what friendship and tolerance means to each student. The campaign was coordinated by the tutor of Tolerance Education Center Rima Dargienė.

On the 20th of October class ID visited Klaipėda State Seaport Authority’s Vessel Traffic Service and Lithuanian High School of Maritime Science. Gymnasium student Matas Alekna‘s grandfather Adomas Alekna, Captain of Klaipėda Harbor, kindly invited his grandson‘s classmates to visit the port and get acquainted with the work of the vessel traffic service and to test their capabilities in one of the most modern European navigational simulators. This integrated ship management simulator with visualization is aimed at students‘ and professional seamen‘s training. It recreates and analyzes the most complex navigational situations. The simulator is complex, it is made up of six bridges and is equipped with a 180 degree cylindrical visualization that helps create an impression of reality. The simulator has everything there is on the bridge of a modern ship. The students had the opportunity to try their hand at the simulator and safely “navigate” the boat to the sea.

Subsequently, the tour moved to the Vessel Traffic Service, which coordinates navigation of vessels through the shipping channel, carries out shipping, navigating supervision and control of the port and its accesses. A vessel may enter or leave the port, may only move from the embankment after receiving the VTS permit. The day-to-day operation of the tower is carried out by three ship operators. The students learned that in order to work as a ship operator one needs to study marine navigation. It was an unforgettable experience for the students to get acquainted with marine professions, career prospects and educational facilities for the students doing a marine course.

The trip was organized by ID class teacher Nerijus Vaišvilas 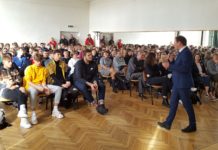 Lecture ‘The New Era of Europe‘ by Arnoldas Pranckevicius, Head of Representation in Lithuania at European Commission 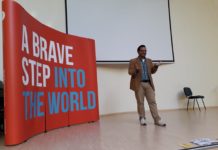 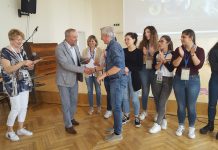 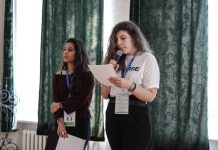 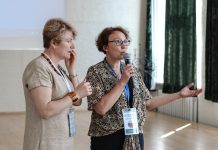 What is your dream of a democratic school